I won’t be doing any more of the “Dare to be Scared” series, at least not for a while. I tried to cover the third book, I really did; but it was so inane I couldn’t get any further. So we’re starting this series instead. More horror-4-tweens, more short stories, you know the drill.

I plan to give the blog a new look soon, file the recaps properly and replace any broken images.

I think this is supposed to be a red skull covered in creepy writhing tentacles? Maybe it relates to the story “Alexander’s Skull” (I won’t discuss that one in this recap – look out for Part 2) but even then, the presence of a skull is the only relevant part. It looks like the publisher just went with a generic creepy image.

END_OF_DOCUMENT_TOKEN_TO_BE_REPLACED

Judging the book by its cover: 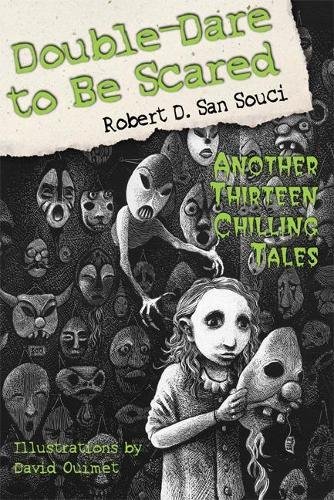 A creepy-looking girl is holding a hideous mask while, in the background, various traditional or Halloween-esque masks can be seen and one of them has turned into some kind of puppet-person that is looming over her. It’s reminiscent of RL Stine’s The Haunted Mask and the Twilight Zone episode “The Masks.” Again, I think this is a great cover. The illustration is suitably creepy and looks good against the colourful text.

END_OF_DOCUMENT_TOKEN_TO_BE_REPLACED

This blog started with a recap of a horror anthology aimed at kids, so I thought I’d revisit that territory for my next series. (I will also be covering the UK continuation of the Horror High series, but those are harder to get hold of.) I found out about the Dare to be Scared books in a Reddit discussion about the story “The Mountain Childers”, which is in the second book. “The Mountain Childers” is good, but is the whole series up to that level of quality? We’re gonna find out.

A kid in bed, looking warily at some kind of … imps? goblins? swinging from his curtains. I really like this illustration. It’s not the most original art style on earth but it gives the book a classy, retro feel and the pop of colour in the title looks great.

END_OF_DOCUMENT_TOKEN_TO_BE_REPLACED

I’ve finished recapping the Horror High series, or at least the original eight books attributed to Nicholas Adams. Let’s take a look back at some of the best, and worst.

Its unbelievably self-centered protagonist, odious characters and a plot that’s completely ridiculous even by the standards of ’80s-’90s YA horror put this one firmly at the bottom for me.

While the panther is fun and makes this one stand out, I can’t shake the creepy feeling around it. Brad is bad enough, but there’s also the way that Jake’s entitlement towards Cassie and pretty much stalking her are treated as care and affection that deserve to be rewarded by her falling in love with him. And Brad’s father wanting to keep a 12-year-old as a sex slave.

When all is said and done, I’m not interested in reading about a sleazy playboy who cheats on five girls with each other and plays blatant, horrible mind games with the most vulnerable one. Also, certain elements are way too contrived in order to drive the plot forward. That could be fun in a better book but yeah, not this one.

I find this one pretty boring, to be honest. Lisa is whiny, no one’s really likable, the plot is dull, generally it doesn’t have a lot going for it. But it is not egregiously bad, it lacks the glaring flaws of the books further down the list, and its twist of there being two killers lifts it out of the doldrums a bit.

Although the first half is slow, the second half picks up the pace. It’s silly, but its premise of a homicidal secret society comprised of nerdy hackers and popular bimbos is fun. The protagonist is somewhat sharper than others in the series and thus less of a drag to read about.

A few twists and turns in this one that subverted my expectations, making it a fairly enjoyable read. It at least tried to do something new with the format, with its first-person narration and introducing the possibility of supernatural elements.

Has the refreshing difference of a villain protagonist. Although Stephanie’s callousness and trashy “bad-girl” persona are exaggerated at times, she’s given some genuinely sympathetic qualities and written in such a way that the reader can appreciate her frustrations, not least because Elizabeth sucks.

Written with a witty turn of phrase and some well-used dark humour. Cathy is also the most engaging, fun, and proactive protagonist in the series. If all the books in the series were this good, let’s be honest, I wouldn’t be writing about them.

The Face Behind the Curtain

As I’ve mentioned before, “Nicholas Adams” doesn’t exist – it was a pseudonym used by several different authors. So who wore the Adams mask in each book?

Clay Coleman: Wrote “Mr Popularity”, “Resolved: You’re Dead”, “Heartbreaker”, “New Kid on the Block” and “Hard Rock.” The first three books aren’t great, to be polite; but there’s a definite tonal shift from “New Kid on the Block” onwards, and Coleman seems to have got into his stride after a while. Actually, “Clay Coleman” is a pseudonym too. His apparent real name is Nicholas Pine, and he wrote the ’80s YA horror series Terror Academy under that name.

Bruce Fretts: Wrote “Sudden Death.” I’m not sure if this is the same Bruce Fretts who was a regular Entertainment Weekly contributor and sadly died earlier this year?

Sherwood Smith: Wrote “Final Curtain”. She too seems to have written mainly fantasy novels and officially published fanfic, although she also has a number of short stories to her name along with essays and books about the craft of writing.

Porterville is the neighbouring town, an hour away by bus

Cresswell High apparently has high staff turnover. Its school secretary is the amusingly-named Mr Cooder. Despite there being several rich students, the school is apparently not well-funded. It has a theatre dating back at least to WWII and has rehearsal and music practice rooms backstage. Each year it gives a prize towards college tuition to a graduating senior on the debate team; said prize is now called the Masterson-Lawing Award in honour of the two boys murdered during Resolved: You’re Dead

Extracurricular activities at Cresswell High include cheerleading, debate team, various sports clubs, Hacker’s Club, drama club, a glee club and art club – the latter two aren’t important to the plot of any book but are mentioned

Soviet leader Mikhail Gorbachev apparently planned to visit Cresswell during a state visit to the USA, although we never find out if he did

So, what’s next? We’re going to look at the UK continuation of Horror High (yes, it exists) along with the Dare to be Scared series aimed at younger kids. Buckle in, folks. It’s gonna be a rough ride.

It’s our final visit to Cresswell! Will the Horror High series end with a bang or a whimper? 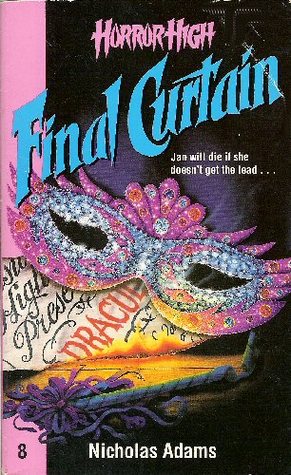 A mask and streamer for a masquerade, lying next to a burning playbill from a production of Dracula. I think all these objects are supposed to be abandoned on the floor of the auditorium? 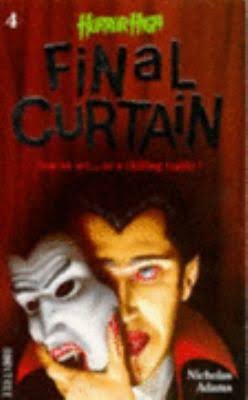 A guy dressed as Dracula, who has blood on his nails and coming out of his mouth, holding a Dracula mask he’s just taken off his face. I like this, it’s quite spooky.

END_OF_DOCUMENT_TOKEN_TO_BE_REPLACED 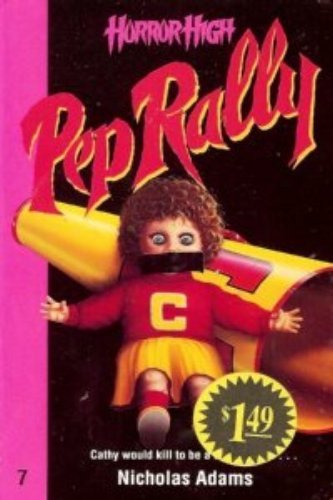 A cheerleader’s megaphone and a doll in a cheerleading uniform with a piece of black duct tape over its mouth. The positioning of the duct tape makes it look like a censor bar. An important scene in the book does involve a doll in a cheerleading uniform with its mouth taped up, but everything else is completely inaccurate. For one thing, the doll in the story is supposed to be a character called Jennie, whereas the one on the cover is clearly intended to be Cathy, the protagonist.

UK cover (sorry it’s so small, this is the only image I could find);

This doll at least looks like the description of Jennie, but does not appear to be wearing a cheerleading uniform. Why’d they change the title? Even though this was the UK edition, the books are still set in the USA and if you’re a fan of stories about American high schools you should know what a pep rally is.

So yeah, this book is not about cheerleading but what is it about? Let’s see.

END_OF_DOCUMENT_TOKEN_TO_BE_REPLACED

I return after about twenty years. Without further delay, let’s get on with the next book. A hockey mask with … WTF is that behind it? Flames? Pompoms?

Someone in a hockey mask brandishing a hockey stick. Boring, but workable and at least it’s relevant.

Onward to the story!

END_OF_DOCUMENT_TOKEN_TO_BE_REPLACED

Sorry to skip over the fifth book in the series, Never Love a Libra by Vicki Kamida. It is, as I explained in a previous post, pretty expensive on the second hand market right now and I’m not prepared to spend around $30 USD on a book that’s not even good. I will do my best to get hold of it eventually; I’ve heard some very strange things about it and want to see if they’re true. Anyway, today we’re looking at this one: Pisces Drowning, which turned out to be the final book in the series, although 13 books were originally planned.

Stories to Tell in the Dark